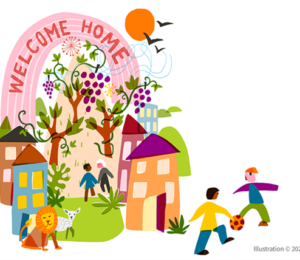 This short act of worship is for use from home.  Please use this service whenever you like during the week.

Pause to settle yourself in God’s presence, knowing that other people are sharing in worship with you.

Gracious God, as we come to worship you, fill us with your prophetic spirit. Empower us to think about the future with hope and expectation.

Speak, O Lord, as we come to you
to receive the food of your holy word.
Take your truth, plant it deep in us;
Shape and fashion us in your likeness,
That the light of Christ might be seen today in our acts of love and our deeds of faith, speak o Lord and fulfil in us
All your purposes, for your glory.

Teach us Lord, full obedience,
Holy reverence, true humility,
Test our thoughts and our attitudes
In the radiance of your purity.
Cause our faith to rise, cause our eyes to see your majestic love and authority
Words of power that can never fail:
Let their truth prevail over unbelief.

Speak O Lord and renew our minds;
Help us grasp the heights of your plans for us. Truths unchanged from the dawn of time that will echo through eternity. And by grace we’ll stand on your promises and by faith we’ll walk as you walk with us.

Speak. O Lord till your church is built
And the earth is filled with your glory.

Merciful God, we ask that you will help us to turn from harmful, unhelpful behaviour and thinking. Embracing the new and celebrating life lived close to you; empower us to be your faithful servants.

Gracious God, we bring to you all that we find difficult, painful and that divides us from you. We ask for healing both for people and places. We bring those we know before you in the quietness……

New heavens and a new earth

17 ‘See, I will create
new heavens and a new earth.
The former things will not be remembered,
nor will they come to mind.
18 But be glad and rejoice for ever
in what I will create,
for I will create Jerusalem to be a delight
and its people a joy.
19 I will rejoice over Jerusalem
and take delight in my people;
the sound of weeping and of crying
will be heard in it no more.

20 ‘Never again will there be in it
an infant who lives but a few days,
or an old man who does not live out his years;
the one who dies at a hundred
will be thought a mere child;
the one who fails to reach a hundred
will be considered accursed.
21 They will build houses and dwell in them;
they will plant vineyards and eat their fruit.
22 No longer will they build houses and others live in them,
or plant and others eat.
For as the days of a tree,
so will be the days of my people;
my chosen ones will long enjoy
the work of their hands.
23 They will not labour in vain,
nor will they bear children doomed to misfortune;
for they will be a people blessed by the Lord,
they and their descendants with them.
24 Before they call I will answer;
while they are still speaking I will hear.
25 The wolf and the lamb will feed together,
and the lion will eat straw like the ox,
and dust will be the serpent’s food.
They will neither harm nor destroy
on all my holy mountain,’
says the Lord.

A new heaven and a new earth

21 Then I saw ‘a new heaven and a new earth,’ for the first heaven and the first earth had passed away, and there was no longer any sea. 2 I saw the Holy City, the new Jerusalem, coming down out of heaven from God, prepared as a bride beautifully dressed for her husband. 3 And I heard a loud voice from the throne saying, ‘Look! God’s dwelling-place is now among the people, and he will dwell with them. They will be his people, and God himself will be with them and be their God. 4 “He will wipe every tear from their eyes. There will be no more death” or mourning or crying or pain, for the old order of things has passed away.’

This is the 4th and final week of Bible month – focussed on Isaiah – and the theme this week is “a New World”. A small nation, feeling threatened by aggressive neighbours is trying to make alliances in order to protect their existence. In doing so they forget about the God who has walked with them throughout their history. The prophet feels compelled to tell the king that his plans are going to result in catastrophe. Over the course of time these terrible things happen- destruction, exile and return. The last 6 chapters of Isaiah focus on what the future might be; how can the people of Judah mend their relationship with God and their neighbours?

We hear in the gospel writings that Jesus was very familiar with the writings of Isaiah. Jesus uses several similar metaphors and images that occur in Isaiah. We hear his use in parables about vines and branches, vineyards and owners, shepherds and their sheep.

What we don’t know is whether Jesus used these images because he knew they would be understood by those first listening to him in first century Galilee, or was he deliberately putting himself into Isaiah’s pictures and words, because he understood himself to be the fulfilment of that vision. This version of events would have been very shocking to Pharisees and Priests at the time.

Matthew’s gospel is keen to emphasise this version of events to his readers, but we have no independent evidence about what was Jesus’ understanding of himself in relation to Isaiah’s writings.

The writer of Revelation takes this idea a step further; Jesus is the bringer of a new heaven and a new earth- a new Jerusalem that encompasses the whole world.

The challenge for us, 2 thousand years later, is what does it mean for us. What do we understand by “a new heaven and a new earth”? What can we do to bring this about? Isaiah and Revelation talk about –“they will be his people and he will be their God”. This sounds like an invitation to listen to God, act together and to do our best to bring his vision into being. Our Lent bible study series focussed on social justice and I wonder if this is also a call to action in that realm, coming from a different theological route?

Make us your prophets, Lord,
Who truly hear your word,
Which fires us with your Spirit’s inspiration. In all we say and do
Prove that your love is true,
The hope and source of peace for every nation.

And when we fail to love
Or set ourselves above
Our neighbours with their different ways of seeing,
Bring us with all our pride
Where Jesus crucified,
For love of all committed his whole being.

Give us his love, that shares
Our neighbours pain, and dares
To suffer enmity and condemnation.
Whether we live or die
Help us to prophesy,
Proclaiming peace and reconciliation.

Though we live quietly,
With no authority
Yet feeble faith in us may show your goodness;
And though we may not see
How crucial it may be,
Our faltering love may show your loving kindness

In faith and hope we pray,
Use us to serve that day
When bigotry and hatred are defeated, when perfect peace is won
And lasting justice done
With loves eternal promises completed.

Prayer of sending out

From Singing the Faith 662

Have you heard God’s voice; has your heart been stirred?
Have you made a choice to remain and serve, though the way be rough and narrow?
Will you walk the path that will cost you much and embrace the pain and sorrow?
Will you trust in one who entrusts to you the disciples of tomorrow?