This week’s message has been prepared by Rev Romeo Pedro.

Dear God, we are named and called by you. We respond to your call. We gather in your name and meet in your presence. God with us, Father, Son and Holy Spirit.

STF 24 Come, now is the time to worship

One day every tongue
will confess you are God,
one day every knee will bow.
Still, the greatest treasure remains
for those who gladly choose you now.

Come, now is the time to worship …

Based on Psalm 139
O God, you have searched me and known me. You know when I sit down and when I rise up; you discern my thoughts from far away.’ (Psalm 139.1)

Loving God, we cannot avoid your presence, and we know that we have sinned against you.
Have mercy upon us as we confess our sin.

You search out my path and are acquainted with all my ways. Even before a word is on my tongue, you know it.
Have mercy on me, O God.

You hem me in, behind and before, and lay your hand upon me. Such knowledge is too wonderful for me.
Christ, have mercy.

Search me, O God, and know my heart; test me and know my thoughts. See if there is any wicked way in me.
Have mercy on me, O God.

Even darkness is not dark to you, O God; for darkness is as light to the Almighty. Forgive us and restore us.
In Jesus’ name.

3 The boy Samuel ministered before the Lord under Eli. In those days the word of the Lord was rare; there were not many visions.

2 One night Eli, whose eyes were becoming so weak that he could barely see, was lying down in his usual place. 3 The lamp of God had not yet gone out, and Samuel was lying down in the house of the Lord, where the ark of God was. 4 Then the Lord called Samuel.

But Eli said, ‘I did not call; go back and lie down.’ So he went and lay down.

6 Again the Lord called, ‘Samuel!’ And Samuel got up and went to Eli and said, ‘Here I am; you called me.’

7 Now Samuel did not yet know the Lord: the word of the Lord had not yet been revealed to him.

8 A third time the Lord called, ‘Samuel!’ And Samuel got up and went to Eli and said, ‘Here I am; you called me.’

Then Eli realised that the Lord was calling the boy. 9 So Eli told Samuel, ‘Go and lie down, and if he calls you, say, “Speak, Lord, for your servant is listening.”’ So Samuel went and lay down in his place.

10 The Lord came and stood there, calling as at the other times, ‘Samuel! Samuel!’

Then Samuel said, ‘Speak, for your servant is listening.’

34 I have seen and I testify that this is God’s Chosen One.

35 The next day John was there again with two of his disciples. 36 When he saw Jesus passing by, he said, ‘Look, the Lamb of God!’

37 When the two disciples heard him say this, they followed Jesus. 38 Turning round, Jesus saw them following and asked, ‘What do you want?’

They said, ‘Rabbi’ (which means ‘Teacher’), ‘where are you staying?’

So they went and saw where he was staying, and they spent that day with him. It was about four in the afternoon.

40 Andrew, Simon Peter’s brother, was one of the two who heard what John had said and who had followed Jesus. 41 The first thing Andrew did was to find his brother Simon and tell him, ‘We have found the Messiah’ (that is, the Christ). 42 And he brought him to Jesus.

Jesus looked at him and said, ‘You are Simon son of John. You will be called Cephas’ (which, when translated, is Peter).

43 The next day Jesus decided to leave for Galilee. Finding Philip, he said to him, ‘Follow me.’

44 Philip, like Andrew and Peter, was from the town of Bethsaida. 45 Philip found Nathanael and told him, ‘We have found the one Moses wrote about in the Law, and about whom the prophets also wrote – Jesus of Nazareth, the son of Joseph.’

46 ‘Nazareth! Can anything good come from there?’ Nathanael asked.

47 When Jesus saw Nathanael approaching, he said of him, ‘Here truly is an Israelite in whom there is no deceit.’

Jesus answered, ‘I saw you while you were still under the fig-tree before Philip called you.’

50 Jesus said, ‘You believe because I told you I saw you under the fig-tree. You will see greater things than that.’ 51 He then added, ‘Very truly I tell you, you will see “heaven open, and the angels of God ascending and descending on” the Son of Man.’

STF 564 O Thou Who camest from above

O thou who camest from above
the pure celestial fire to impart,
kindle a flame of sacred love
on the mean altar of my heart!

There let it for thy glory burn
with inextinguishable blaze,
and trembling to its source return,
in humble prayer and fervent praise.

Jesus, confirm my heart’s desire
to work, and speak, and think for thee;
still let me guard the holy fire,
and still stir up thy gift in me.

Ready for all thy perfect will,
my acts of faith and love repeat,
till death thy endless mercies seal,
and make the sacrifice complete.

Dear friends, it is popular in today’s Church to speak of making a “decision for Christ”. There is value in this – we do need to recognise our capacity to choose to follow Jesus or not.

But, what is missed in this language is God’s choice for us.

This Sunday we have been reminded about the boy Samuel who learned to hear God’s call for the first time (1 Samuel 3:1-20), and the disciple Nathaniel who, in spite of his initial scepticism, was called by Jesus to follow (John 1:43-51).

Both of these stories show that God takes the initiative in inviting us – calling us – to live our lives in alignment with God’s presence, purposes and priorities. In both of these stories, the relationship began with God revealing God’s self to the person. As they encountered God’s glory, they found themselves irresistibly drawn to God, and their lives were changed. Then, as a result of this encounter, they became people who reflected God’s glory and proclaimed God’s message to their world.

Nathaniel got a big surprise when he met Jesus. Having heard where Jesus was from, he had all sorts of prejudices that made him sceptical of Philip’s recommendation. But, then, when he met Jesus everything changed – not because of anything he did, but because of the way Jesus revealed God’s glory to him.

The image Jesus uses of the angels ascending and descending comes, of course, from the ancient story of Jacob’s ladder (Genesis 28:10-22). The trickster Jacob was on the run from his angry brother, whom he had tricked one too many times. Then, one night as he slept, God revealed God’s glory to him in a dream of angels ascending and descending on a stairway to heaven. And with the vision came God’s promise, and God’s call for Jacob to be God’s instrument of blessing to the nations.

Now, with Nathaniel, Jesus uses this image to show that He is the one who reveals God’s glory to the world, and who offers a “stairway to heaven” – a way to encounter God’s glory and be part of God’s purpose.

The starting point, though, is always God’s choice to manifest God’s glory.

This week why not seek to prepare yourself for God’s self-revelation? Why not open your heart and your senses to the glory of God around you and listen for God’s call? Then, as God reveals God’s self to you, respond by committing again to follow Christ and to proclaim Christ’s message through your own life.

In what ways may God be seeking to reveal God’s glory to you in Christ this week? How can you open yourself more to this glory and allow it to change and challenge you?

God’s glory is not as hidden as we may suppose. Usually when we miss God’s glory the problem is not with God, but with our ability to see. The best way to learn to recognise God’s presence all around us is to practice the discipline of wonder. This week, try to slow down a little and look for the wonder in the ordinary things around you – plants and animals, people and circumstances. Hen as you notice God’s glory, respond by committing yourself to God. Commit yourself with me to proclaim God’s message of hope, peace, love, justice, equality, grace, mercy and forgiveness – not just through our words, but reflected in and through our lives. Amen.

Jesus, we pray for our world, for those who hold power to make a difference in the lives of the poor and voiceless. Jesus, give wisdom and courage, and hear our prayer.

Jesus, we pray for the Church, for those who are exploring faith and for those who teach them. Jesus, give unity and peace, and hear our prayer.

Jesus, we pray for those in need of healing and restoration and for the bereaved and those who have died in the faith of Christ. Jesus, give patience and light, and hear our prayer.

Jesus, we pray for ourselves, for the things we worry about and the people we care about. Jesus, give hope and understanding, and hear our prayer. Amen.

The Northampton Methodist Circuit is currently undergoing a ‘reimagining’ process. Please visit this page to download the booklet “Casting the Net on the Other Side” and other materials to help you reflect on this important subject. 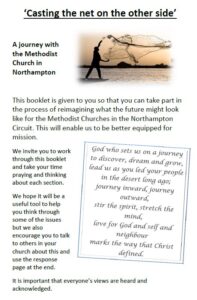