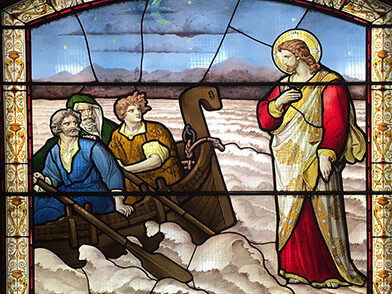 Take a few quiet moments to focus on God.

8 The Lord is gracious and compassionate,
slow to anger and rich in love.

9 The Lord is good to all; he has compassion on all he has made.

13 The Lord is trustworthy in all he promises
and faithful in all he does.

StF48: From the highest of heights

From the highest of heights
To the depths of the sea,
Creation’s revealing Your majesty.
From the colours of fall
To the fragrance of spring,
Every creature unique In the song that it sings…  All exclaiming:

Who has told every lightning bolt
Where it should go,
Or seen heavenly storehouses
Laden with snow?
Who imagined the sun
And gives source to its light,
Yet conceals it to bring us the coolness of night? …None can fathom.

Lord,
sometimes life following you can be difficult.
We find so many dilemmas and struggle so much, wishing it could be easier.
We so want to trust you and see your plan for us. Help us this morning to relax into your presence, to clearly hear your word and be prepared to act on it.
In Jesus’ name.

13 When Jesus heard what had happened, he withdrew by boat privately to a solitary place. Hearing of this, the crowds followed him on foot from the towns. 14 When Jesus landed and saw a large crowd, he had compassion on them and healed those who were ill.

15 As evening approached, the disciples came to him and said, ‘This is a remote place, and it’s already getting late. Send the crowds away, so that they can go to the villages and buy themselves some food.’

16 Jesus replied, ‘They do not need to go away. You give them something to eat.’

17 ‘We have here only five loaves of bread and two fish,’ they answered.

18 ‘Bring them here to me,’ he said. 19 And he told the people to sit down on the grass. Taking the five loaves and the two fish and looking up to heaven, he gave thanks and broke the loaves. Then he gave them to the disciples, and the disciples gave them to the people. 20 They all ate and were satisfied, and the disciples picked up twelve basketfuls of broken pieces that were left over. 21 The number of those who ate was about five thousand men, besides women and children.

Jesus walks on the water

22 Immediately Jesus made the disciples get into the boat and go on ahead of him to the other side, while he dismissed the crowd. 23 After he had dismissed them, he went up on a mountainside by himself to pray. Later that night, he was there alone, 24 and the boat was already a considerable distance from land, buffeted by the waves because the wind was against it.

27 But Jesus immediately said to them: ‘Take courage! It is I. Don’t be afraid.’

Then Peter got down out of the boat, walked on the water and came towards Jesus. 30 But when he saw the wind, he was afraid and, beginning to sink, cried out, ‘Lord, save me!’

31 Immediately Jesus reached out his hand and caught him. ‘You of little faith,’ he said, ‘why did you doubt?’

32 And when they climbed into the boat, the wind died down. 33 Then those who were in the boat worshipped him, saying, ‘Truly you are the Son of God.’

Last week we looked at a number of parables of the Kingdom.  This week we see the Kingdom in action though Jesus and with the same themes:

Last week it was the mustard seed and the yeast that grew and multiplied hugely, this week Jesus takes five loaves and two fish and multiplies them to meet the hunger of way more than 5,000 (they didn’t count women and children – how rude!);  You could understand the disciples maybe thinking, “What use are five buns and a couple of small fish?!”  Nevertheless, they offered what must have seemed an insignificant contribution, all they had, and Jesus did an astonishing thing with their meagre resources.

Last week the Kingdom was likened to hidden treasure and to a merchant searching for fine pearls, each involving risking everything for the Kingdom; this week Peter risks everything to follow Jesus and, trusting in Jesus, gets out of a boat in the middle of the lake and actually walks on water!!  Sure he lost concentration and started to sink, but Jesus didn’t let him drown, and Peter had actually walked on water toward Jesus for a few steps.

We have been seeking God as a Circuit of Methodist churches as to what to do, what God might be saying to us, where He might be leading us.  The question is not just “are we hearing?”, but “are we willing to do something in response?”  The challenge in Jesus’ parable, “Are we willing to risk it, even what seems like everything to us, for God and His Kingdom?”

Here are three questions I came across in my devotions a few weeks ago:
What is my boat? (whatever gives you your greatest sense security)
What is keeping me from getting out of my boat? (probably fear of some kind)
What will I forfeit by staying in my boat? – your destiny, our place in God’s plan for His Kingdom in Northampton.

Let’s not be left sitting in the boat drifting in the storm, wondering what might have been if only we’d taken a risk.  Let’s take our courage in both hands and step out, trusting in Jesus, wherever He may lead..

Take a few moments to reflect, then…

Lord God, we come before you to pray for all those people for whom taking risks is a way of life.
Lord, reveal yourself to them and keep them safe.

We pray for our emergency services – paramedics, the police, the fire service – all who daily face difficult situations as they seek to help to protect us and make our world a safer and more peaceful place.  Please help us and bring the Covid 19 pandemic to an end
Lord, reveal yourself to them and keep them safe.

We pray for people who work in troubled areas – the armed forces in war zones,
those who bring humanitarian aid into areas of natural disaster, the people they serve and many more.
Lord, reveal yourself to them and keep them safe.

We pray for people who take risks in your name, Lord Jesus – those who take your word where it is most needed – and for people who grapple with faith and doubt.
Lord, reveal yourself to them and keep them safe.

We pray for people who are ill, for those who are grieving, for those for whom life feels like a frightening storm.
Lord, reveal yourself to them and bring healing and peace.

We pray for our Circuit of Churches, for a clear and shared vision for our place in building your Kingdom in Northampton.
Lord, reveal yourself to us and make us willing to step out and follow You.

We have an anchor that keeps the soul
Steadfast and sure while the billows roll,
Fastened to the Rock which cannot move,
Grounded firm and deep in the Saviour’s love!

Will your anchor hold in the straits of fear,
When the breakers roar and the reef is near;
While the surges rave and the wild winds blow,
Shall the angry waves then your bark o’erflow.

Will your eyes behold through the morning light
The city of gold and the harbour bright?
Will you anchor safe by the heavenly shore,
when life’s storms are past for evermore?

May the grace of our Lord Jesus Christ,

The love of God, and the fellowship of the Holy Spirit be with us all, evermore.

Service, Message and format by Revd Phil Snelson
Prayers adapted from Roots on the Web

Please click on the button below to read a letter from Pam Kirkland, on behalf of The Circuit Leadership team. There is also a short questionnaire that everyone is asked to complete, this can be done online, by email or by post.