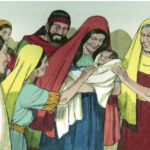 This short act of worship is for use while we are unable to attend church.  Pause to settle yourself in God’s presence, knowing that other people are sharing in worship with you.

This month we have been following the book of Ruth.  For the final Sunday in June we study chapter 4.

Take a few moments to be still, and to remember all the times this week where you have…
known God’s care in acts of kindness
known God’s encouragement in conversations
known God’s strength when you’ve felt weak

Hymn: Blessed be the name of the Lord (Singing the Faith 40)

Holy is the name of the Lord…

The Name of the Lord is a strong tower,
The righteous run into it,
And they are saved.
(Repeat)

Glory to the name of the Lord…

Almighty God, in these strange times where we are experiencing uncertainty and we know the reality of an ever present threat, we are grateful for the networks of family and friends that we have, and the technological tools that keep us connected in our networks online and by phone, especially when we are physically distant.

As we explore the book of Ruth, we are watching the world change with new boundaries for living and we are faced with unfamiliar situations.

People have engaged in a bizarre kind of harvesting or gleaning – one characterised by gathering and hoarding without due consideration of those who are marginalised but also by generosity of sharing and provision for different kinds of need. We are sorry when…[add your own responses]

Loving God, help us to engage for a time through these resources, to hear you in our reading, listening, watching and wondering and to enjoy conversation with others whether they are beside us in person or across the virtual world. We offer you ourselves, our time, our presence and our open hearts.

Meanwhile Boaz went up to the town gate and sat down there just as the guardian-redeemer he had mentioned came along. Boaz said, ‘Come over here, my friend, and sit down.’ So he went over and sat down.

2 Boaz took ten of the elders of the town and said, ‘Sit here,’ and they did so. 3 Then he said to the guardian-redeemer, ‘Naomi, who has come back from Moab, is selling the piece of land that belonged to our relative Elimelek. 4 I thought I should bring the matter to your attention and suggest that you buy it in the presence of these seated here and in the presence of the elders of my people. If you will redeem it, do so. But if you will not, tell me, so I will know. For no one has the right to do it except you, and I am next in line.’

5 Then Boaz said, ‘On the day you buy the land from Naomi, you also acquire Ruth the Moabite, the dead man’s widow, in order to maintain the name of the dead with his property.’

6 At this, the guardian-redeemer said, ‘Then I cannot redeem it because I might endanger my own estate. You redeem it yourself. I cannot do it.’

7 (Now in earlier times in Israel, for the redemption and transfer of property to become final, one party took off his sandal and gave it to the other. This was the method of legalising transactions in Israel.)

8 So the guardian-redeemer said to Boaz, ‘Buy it yourself.’ And he removed his sandal.

9 Then Boaz announced to the elders and all the people, ‘Today you are witnesses that I have bought from Naomi all the property of Elimelek, Kilion and Mahlon. 10 I have also acquired Ruth the Moabite, Mahlon’s widow, as my wife, in order to maintain the name of the dead with his property, so that his name will not disappear from among his family or from his home town. Today you are witnesses!’

11 Then the elders and all the people at the gate said, ‘We are witnesses. May the Lord make the woman who is coming into your home like Rachel and Leah, who together built up the family of Israel. May you have standing in Ephrathah and be famous in Bethlehem. 12 Through the offspring the Lord gives you by this young woman, may your family be like that of Perez, whom Tamar bore to Judah.’

13 So Boaz took Ruth and she became his wife. When he made love to her, the Lord enabled her to conceive, and she gave birth to a son. 14 The women said to Naomi: ‘Praise be to the Lord, who this day has not left you without a guardian-redeemer. May he become famous throughout Israel! 15 He will renew your life and sustain you in your old age. For your daughter-in-law, who loves you and who is better to you than seven sons, has given him birth.’

16 Then Naomi took the child in her arms and cared for him. 17 The women living there said, ‘Naomi has a son!’ And they named him Obed. He was the father of Jesse, the father of David.

The genealogy of David

Perez was the father of Hezron,

19 Hezron the father of Ram,

Ram the father of Amminadab,

20 Amminadab the father of Nahshon,

Nahshon the father of Salmon,

21 Salmon the father of Boaz,

Boaz the father of Obed,

22 Obed the father of Jesse,

and Jesse the father of David.

Well what a story!  Elimelech and Naomi take their family off to a pagan country seeking food and it proves quite “unfruitful”.

Naomi returns home to Bethlehem a widow declaring that the Lord has brought her home ‘empty’.  Her daughter-in-law has come with her having made a covenant commitment to Naomi that ‘your people shall be my people, and your God, my God.’ A pagan Moabite committing in faith to the God of Israel!

In this final chapter so many things that were broken in the opening part of the story, by contrast, are now restored, redeemed. Boaz deals with the family politics, “someone” closer in line to take on the estate… oh and Naomi & Ruth.  That “someone” remains unnamed and loses his sandal is all to his shame in contrast with honourable Boaz.

Boaz marries Ruth and after ten years of barrenness in Moab, now comes  fruitfulness as God gives her a son – Obed (“he serves, provider, guardian”).

All the prayers of blessing are fulfilled from Boaz over Ruth – ‘May the Lord reward you’ (Ch2), ‘May you be blessed by the Lord’ (Ch3) and of the elders that the Lord make Ruth ‘like Rachel & Leah’ and Boaz ‘to prosper and be famous in Bethlehem’, and the women of the town too ‘May this child be famous in Israel’. Naomi who was “empty” is now fulfilled as a grandparent.

And a short genealogy invites us to realise that this simple love story is also God’s providence at work, not just for Naomi, Ruth & Boaz but for generations to follow as He prepares the way for the renewal of Israel under David, and ultimately the redeeming of the world through Jesus Christ.

Let us note the remarkable things that our God can do through ordinary people of faith. May we be encouraged by Ruth and Boaz, to live godly lives of kindness, grace, selflessness, loyalty, for we never know what effect it may have as our Lord continues to work behind the scenes to bring His purposes for redeeming His world.

Hymn: There is a Redeemer (Singing the Faith 338)

There is a Redeemer,
Jesus, God’s own Son,
Precious Lamb of God, Messiah, Holy One.

Thank You, O my Father,
For giving us Your Son,
And leaving Your Spirit—
Till the work on earth is done.

Jesus my Redeemer, name above all names,
Precious Lamb of God, Messiah,
O for sinners slain.

When I stand in glory, I will see His face,
And there I’ll serve my King forever
In that holy place.

We pray for those who are lonely and isolated.
May they know the welcome of your love.

We pray for those in prison. For people suffering from mental health issues.
May they know the welcome of your love.

We pray for children excluded from school; for their families and those with responsibility for their education.
May they know the welcome of your love.

For those who make important decisions which affect many lives. Remembering especially the Methodist Conference meeting this week.
May they know the welcome of your love.

For the victims, families and friends of those attacked this week in Reading.
May they know the welcome of your love.
Loving God, as you welcome us, may we welcome others with warmth and steadfast love.
Amen.

1) When I was lost, You came and rescued me;
Reached down into the pit and lifted me.
O Lord, such love,
I was as far from You as I could be.
You know all the things I’ve ever done,
But Jesus’ blood has cancelled every one.
O Lord, such grace, to qualify me as Your own.

There is a new song in my mouth,
There is a deep cry in my heart,
A hymn of praise to Almighty God – hallelujah!
And now I stand firm on this Rock,
My life is hidden now with Christ in God.
The old has gone and the new has come – hallelujah!
Your love has lifted me.

2) Now I have come into Your family,
For the Son of God has died for me.
O Lord, such peace,
I am as loved by You as I could be.
In the full assurance of Your love,
Now with every confidence we come.
O Lord, such joy
To know that You delight in us.

(Bridge section – not in Singing the Faith)
Many are the wonders You have done,
And many are the things that You have planned.
How beautiful the grace that gives to us
All that we don’t deserve,
All that we cannot earn,
But is a gift of love.

There is a new song in my mouth,…

A prayer of blessing:

God our redeemer, comforter and giver of life, strengthen us for the changing days which lie ahead. Fill us when we are empty prepare us to partner with you in your mission. Amen