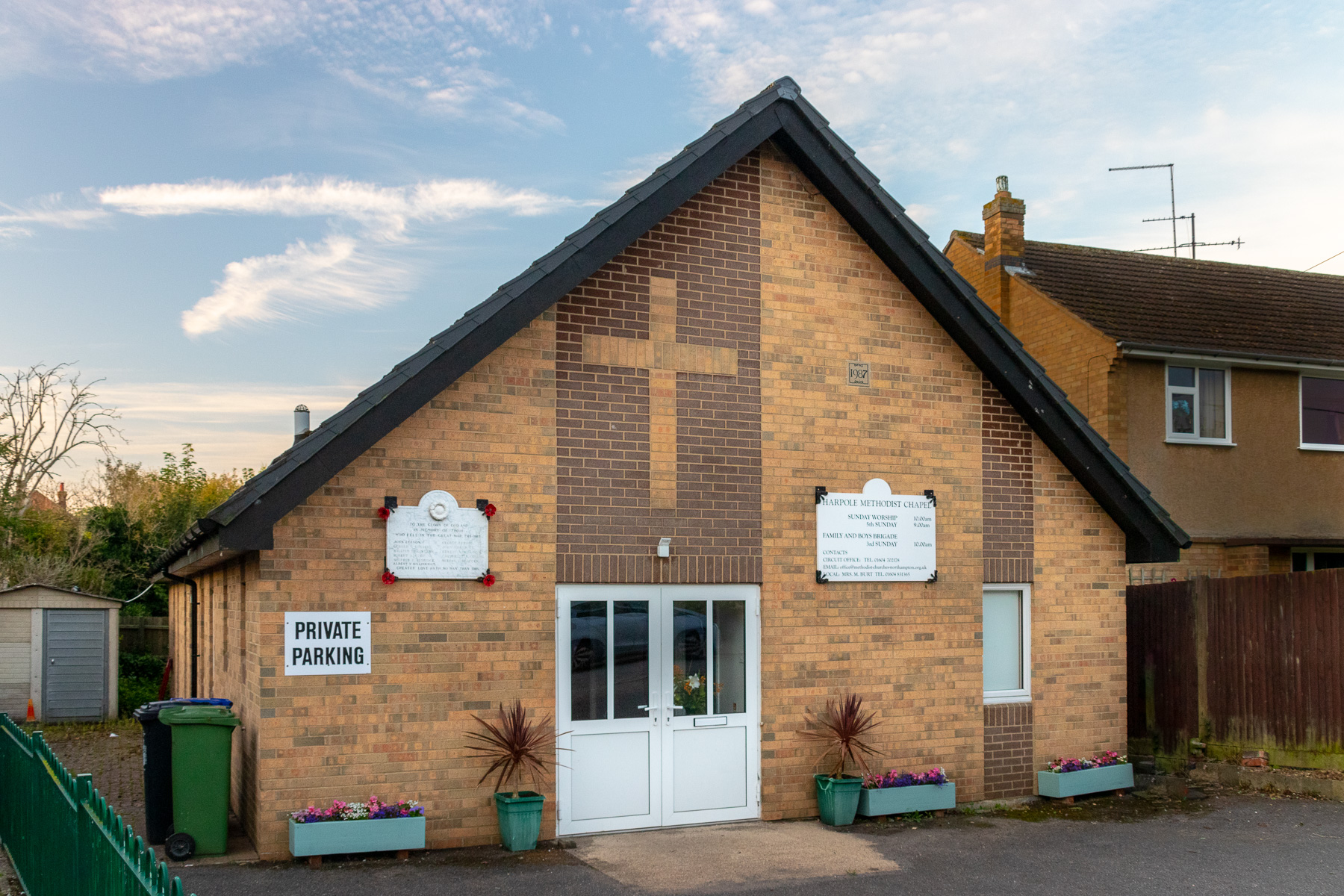 John Wesley preached in Harpole in 1769. It was a Thursday and 9.30 am … it says he preached to a ‘thirsty multitude’! In 1836 the first Chapel was built which was extended in 1896, the original becoming the Sunday School room. The third place of worship in a village with a population of about 700!

During World War I Harpole lost 47 men and 11 of them attended the Methodist Chapel which, although still a significant part of the social life of the village, the war had begun to change the feeling of people towards church and religion and a gradual decline in congregation and the condition of the Chapel began. In the mid 1970s the congregation had fallen to less than ten and it was widely assumed that Harpole would be closed within ten years. The Chapel had an outside toilet, no damp course, no drainage from the kitchen sink and was built over a water course that became a stream at the rear of the building. What we did have though, was wet rot, dry rot, rising damp, a leaking roof (where the chimney to the old tortoise stove emerged) and resident toads under the floor boards! We also had a strong belief that God was not yet finished with Harpole Meths!

In 1980 we inherited the First Company Harpole Boys Brigade from the Baptist Chapel which gave us a new lease of life for the time being. However by 1985 the decision had to be made whether to spend £34K on the old Chapel, and consequently still have the same building, or commit to £54K for a new multi-purpose one. Thank God we chose the latter, and there is never a week goes by when we don’t! Thank God for Rev. Bill Tabarn whose vision, energy and encouragement drove us on, and thank God for the old members of the congregation who were desperate to see a new Chapel in their lifetime. In the end there was very little sentiment attached to the loss of the old building …. We were thrilled with the new and we had kept a few artefacts, the pulpit, communion rail, table etc.

The Chapel has become, again, a flourishing part of community life. It is booked to capacity by Local organisations (including the Church of England for Mothers Union, PCC and Choir practise!)     We open our doors to the wider community of village, Circuit and town with Concerts, Bring and Buy, Fish & Chips, Afternoon Teas, and Breakfasts at 9am on the 5th Sunday of the month in addition to a variety of services.                                                                We thank God that our congregation has increased and we often have a full house. Our membership is also on the increase, although not by young people … but, hey, never mind!  The message Harpole would like to share is … never give up, although God’s vision for your future may not immediately correspond with yours!